The Data Science Lunch Seminar Series is an informal weekly gathering of NYU Data Science affiliated persons to discuss data science related topics. Each week there is a 30 minute presentation, over lunch (provided), with additional time for conversation and questions. The series meets Wednesdays from 12:30-1:30 PM at the Center for Data Science.

The lunch seminar is organized by Emin Orhan, Johann Brehmer, and Emily Mathis Corona. Please contact Emin or Johann if you are interested in giving a talk. 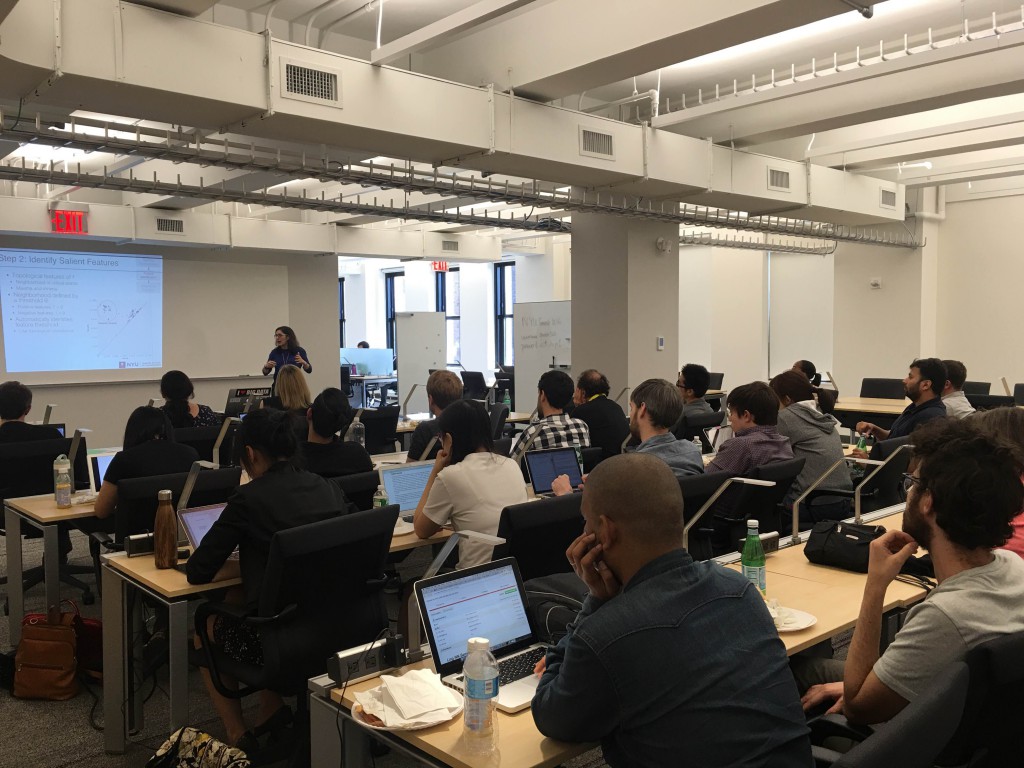 September 18, 2019
Andrew Wilson, New York University, “How do we build models that learn and generalize?”

December 5, 2018
Elizabeth Bruch, University of Michigan, “How (and Why) Online Dating Experiences Differ across American Cities”

February 20, 2019
Will Geary, CitySwifter
“Space-Time Modeling and Visualization for Mobility”

March 6, 2019
Matthew Daniels, The Pudding
Data-driven Storytelling at The Pudding

November 15, 2017
Benjamin Cook, NASA Goddard Institute for Space Studies
“Monitoring and Modeling Drought and Climate Change from the Past to the Future”

February 21, 2018
Richard Galvez, MSDSE Postdoc in the Center for Data Science
“The First Three Minutes: an exposition on how nuclear elements formed in the early universe and an unsolved mystery involving dark matter and Beryllium-7”

February 8, 2017
Alexander Bock, “OpenSpace — Moving from What to How in Science Communication”

February 22, 2017
Yannis Liodakis, “Revealing the intrinsic timescale distribution in the most active of galaxies”

November 5th
Jonathan Goodman, Professor of Mathematics
Topic: The hermeneutics of MCMC sampling: points of view about samplers, some of which don’t depend on your point of view.

February 5th
Ying Lu, Assistant Professor of Applied Statistics at NYU and
Dr. Preeti Raghavan, Assistant Professor at NYU Medical Center
Topic: Quantifying Feedforward Control: A Linear Scaling Model for Fingertip Forces and Object Weight
In this paper, we fit a linear growth curve to the biomechanical data of grasping  in order to understand the relationship between fingertip forces and object weight among healthy subjects. Our results show evidence of feedforward control during the grasping task when healthy subject grasp/lift an object with familiar weights.

February 23rd
Daniela Huppenkothen, Moore Sloan Data Science Fellow at NYU
Topic: Exploring the Violent Universe: Astrophysical Data (Analysis) at High Energies
This talk will give an introduction into astronomy at very short wavelengths, where we see the universe’s most extreme phenomena, and showcase typical data analysis problems—some of which we are working on at the CDS—which we have to solve in order to understand the underlying physical processes.

March 3rd
Aaditya Rangan, Associate Professor of Mathematics at NYU
Topic: Efficient Methods for Detecting Low Rank Structure
Discussion of some methods for finding low-rank submatrices within gene-expression data; It will be necessary to correct for case-control status as well as covariates.

April 8th
Patrick Wolfe, Professor of Statistics and Honorary Professor of Computer Science at University College London
Topic: Network Analysis and Nonparametric Statistics
Networks are ubiquitous in today’s world.  Any time we make observations about people, places, or things and the interactions between them, we have a network.  Yet a quantitative understanding of real-world networks is in its infancy, and must be based on strong theoretical and methodological foundations.  The goal of this talk is to provide some insight into these foundations from the perspective of nonparametric statistics, in particular how trade-offs between model complexity and parsimony can be balanced to yield practical algorithms with provable properties.

April 13th
Karen Adolph, Professor of Psychology and Neural Science at NYU
Topic: Databrary and Datavyu: Coding, Sharing, and Repurposing Video
A description of the promises and challenges of coding, sharing, and repurposing video data

April 29th
Joshua Tucker, Professor of Politics at NYU
Topic: Using Social Media to Study Politics
How can we use social media to study the political behavior of masses and elites?  What we can do, what we can sort of do, and what we’d like to be able to figure out how to do…

May 5th
Dan Brown, Associate Professor of Computer Science at the University of Waterloo
Topic: Do better lyrics make a hit?  Complexity of rhymes in music lyrics

September 21st
Kyunghyun Cho, Assistant Professor, Computer Science and Data Science
Topic: Lost in Interpretability
I hear from non-ML as well as ML researchers once a while that they find it difficult to work with neural networks due to the lack of interpretability compared to other simpler models which are in many cases some variants of linear models. This has always made me wonder if there is a natural tradeoff between interpretability and modelling accuracy. In this talk, however, I argue that no such tradeoff exists, which has been argued already more than a decade ago by Breiman (2001). Furthermore, I present some recent results from deep learning showing that seemingly complex models, such as deep neural nets and recurrent neural nets, are in fact interpretable, if we try hard enough.